Back in 2004, after graduating high school and touring with my band for a year, I was convinced that I wanted a career in the music industry. I already knew how to play guitar and had some previous recording experiences.

It wasn’t long before I started doing research for an education in the field. I knew I didn’t want to be a classical musician. At the time music theory was a little overwhelming to me.

Around this time I started working at recording studios and my attention started drifting towards production. Shortly after I started investing in basic recording gear and before I knew it, I was making a decent living recording mixtapes and demos for local artists and bands.

Audio Engineering became my first choice and after many though I took the decision of moving to Hollywood to attend The Los Angeles Recording School.

In 2006, I graduated from LARS as a Recording Engineer and resumed working with my band. I built a studio in my guest house and started using it commercially for many purposes like recording albums, singles, voice over, podcasting, youtube videos, etc. During this time I also worked on and off in many recording studios. Mainly as a freelancer in between touring.

In 2009, I started Law School at the Autonomous University of Baja California (Mexico). Graduated in 2013. I obtained my license the following year and started working as Lawyer for Latin American artists.

In 2014, after eight years of touring, three albums, three placements and a music video, I decided it was time to give up the nomad life and stay in the studio to write music for as many projects as possible. Around this time I started focusing more on making beats, mixing and mastering.

I made my mixing and mastering services available on my first beat selling website, which later evolved into Beatmaker Lab, and also at Soundbetter.com and Fiverr.com where I have received over 1,700 reviews and completed over 2,600 orders.

In 2015, I released my first hip hop instrumental album, which was later discontinued from all digital platforms after selling the rights to a well known stock music company. This was a bittersweet victory and made me want to start fresh.

In 2018, I decided to rebrand my website and Lean Beats became Beatmaker Lab. Shortly after I traveled to Europe & New York, cooked up a new batch of fire beats and that is how this project came about.

I’m grateful for being able to complete my initial 10,000 hours in the game. I’m ready to give back to the community. This is just the beginning.

HOW TO EXPORT STEMS FOR MIXING

WHAT IS THE DIFFERENCE BETWEEN A BEAT MAKER AND A PRODUCER 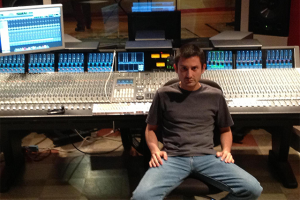 Fernando Castillo aka The Arranger is a Producer and Recording Engineer from Tijuana, Mexico. The Los Angeles Recording School Alumni. Entertainment Lawyer. Entrepreneur.